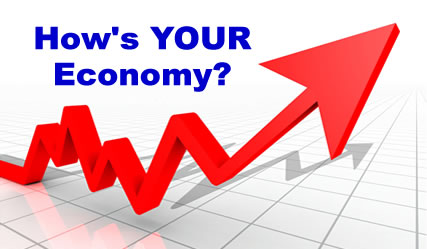 Nationally and globally, the news is not good. Economies all over the world are suffering. But today I’d like to ask you about your own personal economy. How are you doing? Over the years, I’ve noticed that no matter how bad the economic environment, there are always those who thrive and prosper, who refuse to take their direction from national headlines but who are determined to succeed anyway. I’ve also noticed, on the other side, that there always seem to be people who can’t seem to make things work, even in the best of economic circumstances. The truth is that the national economy, as important as it is to our country’s well being, is not the deciding factor in determining your success. You are.

I’m reminded of a little story written before I was born. I’ve had it in my files longer than I care to admit. It first appeared on January 15, 1958 in American Metal Marketing. This story speaks to me because, to some extent, we are all affected, for good or bad, by our surroundings.

The Man Who Sold Hot Dogs

He increased his meat and bun orders. He bought a bigger stove to take care of his trade. He finally got his son home from college to help him out. But, then something happened.

His son said, Father, haven’t you been listening to the radio? There’s a big depression coming on. The international situation is terrible. The domestic situation is worse.”

That made his father think: “Well, my son’s been to college, he reads the papers, and he listens to the radio. He ought to know.” So, the father cut down on his meat and bun order, took down his advertising signs, and no longer bothered to stand out by the highway to sell his good hot dogs. Sales fell fast, almost overnight.

You’re right, son,” the father said to the boy. “We certainly are in the middle of a great depression. There just isn’t any business.”

One of the major indicators of the health of our national economy is the Consumer Confidence Index (CCI). This measures the attitude of the public concerning the economy. 40% of the index level relates to people’s attitude about the current state of things, and 60% of the index measures people’s expectations about the future. The higher the Consumer Confidence Index, the better the economy. The index directly affects banks, interest rates, prices, manufacturers, and stocks. In short, consumer attitude plays a major role in determining the state of our national economy.

You too have a Consumer Confidence Index for your personal economy. It’s your attitude. It’s your expectation of the future. The reality is that you decide if your economy is going to be good or bad. If your Consumer Confidence Index is low, perhaps you need to infuse it with some enthusiasm, new ideas and hard work. Then, make a conscious decision to look for the positive indications and opportunities which are all around us. Don’t ever use headlines as an excuse for poor personal performance. With a little work, and an attitude adjustment, your personal economy can buck the trend and you will be well on your way to achieving the success that you deserve.

I’ve been thinking a lot about Charles Dickens’ famous quote from the first line of his classic novel, A Tale of Two Cities. He begins, “It was the best of times, it was the worst of times.” This is certainly true of our day. Happily, each of us gets to choose which it will be in our own lives. For me, I choose the best of times. I hope you will too.