A number of months ago, some family members and I decided to run a 5K. We knew that we’d never make it unless we trained and prepared. So, we started training–running short distances at first, then going longer and further. My 12-year-old son watched us huffing and puffing with some amusement but said he wanted no part in our “little” race.

When the day of the race arrived, we all got up early and drove to the starting area. As we got out of the car, my son said, “I think I’ll run after all.” So, we signed him up, knowing full well that he would never make it. The starting gun fired and I saw my son take off like a shot. I smiled a little inside because I knew his energy would be gone around the next bend. 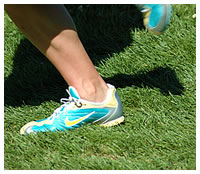 The rest of the story is: I never saw my son again until the finish line where he beat me by nearly 3 minutes! He had almost collapsed with exhaustion at the finish line and was feeling pretty sick–but he had done it! He had beaten me.

No, I’m not saying that preparation is unimportant. On the contrary, I personally would never have made it at all without training in advance. And, just imagine how much better my son would have done had he trained and prepared for this race.

My point is this: as hard as it was, he wouldn’t give up. That’s a lesson for you and me. Yes, we should prepare in advance; yes, we should anticipate roadblocks and try to make the road ahead as smooth as possible. But, once we are on the road, no matter how difficult it gets, no matter how tired or discouraged we become, the winner keeps going no matter what.

Success Tip: As we travel the road of life, we will all face times when we are stressed, tired, and even discouraged. In those moments, your success is determined by your courage and determination to keep running, no matter what.