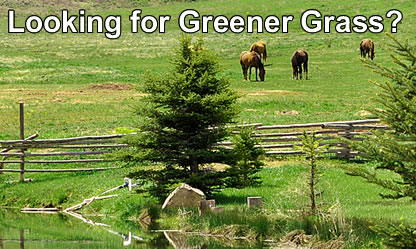 A proverbial story is told about a young man who lived in a house on the edge of a beautiful valley. Each morning at dawn he would step out of his front door and with the sun at his back gaze at the valley beyond, bathed in the amber rays of morning sun. Across the valley was a house that shone with golden windows. “Oh, how wonderful it would be,” he thought, “to live in a house such as that, a house with such stunning golden windows. It must me a truly magnificent house.”

Each morning, day after day, he looked with a touch of envy at the house with the golden windows until thoughts of moving there consumed his every moment. Finally, one morning he packed his belongings in a wagon and began the long trek across the valley. The sun was hot and the journey arduous. But he knew that if he could just get across the valley to the house with the golden windows, it would all be worth it.

Finally, just as the sun was dipping low in the western sky, he arrived at his destination. There, he found an old, run-down house, nothing like what he had imagined. Discouraged, he turned and looked across the valley, now illuminated by the setting sun at his back. To his astonishment, he saw his own humble house, but now the windows shone with golden light. He had traveled dozens of miles only to discover that he had left behind the very thing he was seeking. He was already living in the house with the golden windows.

Russell H. Conwell tells a similar story about a farmer in Africa who heard about people getting rich finding diamonds. So, he sold his farm and spent his life searching for diamonds. Meanwhile, the man who purchased his farm was one day out by the river and saw a stone sparkle in the sun. He picked it up and brought it home. Later a visitor commented on the beautiful stone and suggested that it might be a diamond. “Couldn’t be,” the man said, “my stream bottom is filled with such stones.” Well, you guessed it, the farmer’s land turned out to contain one of the largest, most productive diamond mines in history. This farmer searched everywhere looking for diamonds, when he already owned acres of diamonds. He just didn’t look in his own back yard.

When things get difficult, we tend to look at other people or other companies and assume that the grass is greener on the other side of the fence. When viewed from a distance, their opportunities often look richer, their problems seem fewer, and success looks easier. The temptation is to run here and there looking for better, easier opportunities. We sometimes wistfully look at other companies or industries and wish things were that easy for us. But, it is often an illusion.

When I was a sales manager I often saw sales people jump from one company or product to another never taking time to really achieve something because they were soon off to the next opportunity. These people often ended up back in the same company where they started in the first place, having wasted a lot of time and effort. One of my mentors often quipped, “many a cow has slit her throat sampling the grass on the other side of the fence.” How true that is.

In most cases, if you want greener grass, you’ll get better results starting with the grass on our own side of the fence. Prepare the ground, enrich the soil, nurture and water the grass until it thrives. Put your time, energy and effort into making your current opportunities blossom into success. Now, I realize that there are times when it is necessary to make a change and seek new opportunities. I have done it myself. But, if we will first learn to thrive where we are, to make the most of our current opportunities, we will be in a much better position to make intelligent decisions rather than flitting all over, back and forth, trying to find better opportunities elsewhere.

When things get a little tough, resist the temptation to immediately look elsewhere for opportunities and the prospect of easier success. Focus your energy on thriving where you stand. Look for opportunities that you may already have, but might not have recognized. Rise to the top in whatever situation you find yourself. From there, you will be able to more clearly discern the true color of the grass.