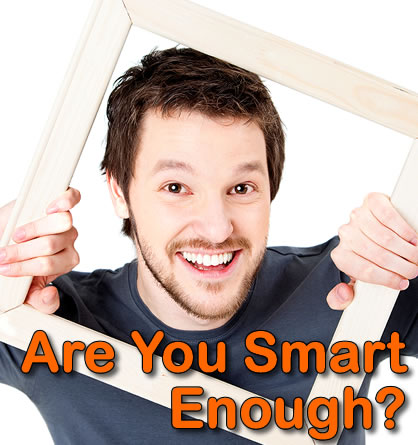 I recently read a study saying that 95% of people are insecure about their intelligence and education. Are you smart enough to succeed in this competitive world? It’s easy to look at others and feel that they are smarter or better educated than we are—and use that as an excuse for our own failure. The truth is that education and intelligence are NOT the determining factor for a person’s success, well-being, or happiness. Some of the people whom I admire the most have only average intelligence, but they use what they have to succeed and make the world a better place.

When I first entered the world of selling, my mentor and trainer was named Mark.  Mark is an amazing man, a leader in every sense of the word. But his mind, as he put it, was “not cluttered up with a bunch of useless facts.” He often had to look up simple facts, or ask someone else for help. But he had an uncanny ability to unify the team and motivate them to positive action. His impact is still felt by the many thousands of successful people who can trace the roots of their accomplishments to his influence and enthusiasm.

Think about it this way. If I was asked to work on a project with another person, I would much rather work with someone who has a positive, “can do” attitude, who may have only average intelligence, but who will go to work and use all of his or her mental abilities and education to further the project, than I would want to work with someone with superior mental faculties but who uses them in a negative way, who spends his or her time putting you down or coming up with reasons why ideas won’t work. Too many so-called intelligent people spend their lives in dead-end jobs because they can think of all the reasons why it’s too risky to step up, to work with the team, to start a business, or to follow a dream. These were referred to by President Calvin Coolidge as “educated derelicts.”

The important thing is not so much how smart you are, but how you choose to use and apply your intelligence. When viewed in this light, superior intelligence can actually be a disadvantage if it tends to cause people to over-analyze or look for the negative rather than moving ahead with positive action. I am well acquainted with a woman who was a member of MENSA, an exclusive organization for people whose IQ is in the top 2% of the population. She earned numerous degrees and was a voracious reader whose head was full of amazing facts. So, how did she use this superior mental power? She sat in her house and criticized everyone else. “The mayor is a moron; the local school principal is an idiot; the postmaster is stupid.” She spent much of her time tearing down other’s ideas and reasoning why they wouldn’t work rather than coming up with solutions and then working in the community to implement them. In her later years, she became a “bag lady” and wandered around the city streets, intent on proving to everyone how smart she was. As a result, she had few friends, made little impact on society, and sleeps in an unmarked grave.

Please don’t misunderstand. I think education and mental stimulation are critically important and we should all get as much as we can. Studies show that we can actually improve our intelligence through continuous study and effort. I know plenty of bright, intelligent people who have made amazing contributions and are highly successful. But, when it comes right down to it, a positive creative attitude is much more important than your level of intelligence. Why is this great news for all of us? Because we have 100% control of the attitude we choose. We can control the kind of thinking that guides our mental functioning to get maximum results from our natural abilities. You have all the intelligence you need to achieve your dreams. Learn and study all you can, then go out and do something!

Success Tip: When you feel intellectually inferior, as we all do at times, change your focus to how you choose to apply and use your natural intelligence. Do you read and study, or do you waste time on mind-numbing activities? Do you create or do you tear down? Do you take positive action, or do you over-analyze and thus paralyze your progress?