James was born in 1875 on a small farm in Missouri, the seventh of twelve children in a poor family. His father was a minister, and the children were taught hard work, honesty, self-reliance, and discipline. Although he worked hard on the farm, and studied in school, James had every reason to believe that his opportunities were limited. When he was 20, his father died and James began working as a salesman at the local dry goods store in Hamilton. Times were difficult and the other salesmen were often cruel to him. But he persevered.

When he was 22, James moved to Denver where he purchased a butcher shop. He was determined to treat each customer fairly. When he refused to give special treatment to a powerful few, they retaliated and his business failed. 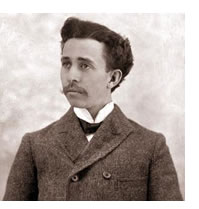 Undeterred, he went to work at another dry goods store, called the Golden Rule store. Soon he was a partner and, in 1902, opened his own Golden Rule store in Wyoming. It was a small, one-room store with the family’s living quarters in the attic. James offered fair prices and great service to everyone, which made the store successful. In 10 years, there were thirty-four Golden Rule stores throughout the west.

Personal tragedy struck James in 1910 when his wife died of pneumonia, leaving him with two sons. At the time, he wrote that his “world crashed” around him. He married again 9 years later, only to have his second wife pass away after only four years, leaving him with another son. In spite of these personal setbacks, James was determined to carry on.

James bought out his partners and renamed the Golden Rule stores after himself. He hired and trained “associates” whom he developed into successful manager-partners. Each manager, was to then find  another honest, hardworking person and train them to manage another store. Using this formula, the company thrived. By 1924, there were 500 stores, and by 1929, 1400 JC Penneys stores were in operation.

The stock market crash of 1929 left James in personal financial ruin, but he was determined to keep his stores alive. He borrowed against his life insurance policies to help the company meet payroll and successfully survive the great depression. In 1946, with his business on solid footing, James retired from day-to-day management of the company, but continued to be active and involved, going to his office daily until well into his 90’s.

At the age of 92, James was asked by a newspaper reporter the secret to his success. “I don’t believe in luck,” he said, “Put a P in front of it!” Pluck means living with courage and resolution. It means refusing to give up. It means believing in yourself and your vision in spite of opposition or adversity. “My eyesight is impaired…” he continued, “but my vision is stronger than ever.”

Success Tip: Next time you feel that adversity has beaten you down, think of James Cash Penney. Don’t worry about luck, just put a P in front of it and forge ahead.