If you think that you had a disadvantaged childhood, listen to the story of Mario Andretti.

Mario was born in Northern Italy the same year that World War II broke out.  When the war finally ended, borders had shifted and his family found themselves in communist-controlled Yugoslavia.  They decided to leave their homeland as refugees searching for better opportunity.  From age eight to fifteen, Mario lived in a cramped refugee camp, with only blankets separating his family from others in the camp.  At last, the family received visas to come to the USA.  They left all of their belongings and moved to Pennsylvania.

When Mario arrived in America, he had no money, no family social connections, sparse education, and he spoke no English.  But, he did bring with him a passion for racing cars.  He discovered a racetrack near his home and began learning all he could about racing.  With no money to purchase a car, Mario and his twin brother Aldo began building a car of their own, a 1948 Hudson Hornet Sportsman Stock Car, which they began racing at the age of eighteen, just three years after arriving in the US. 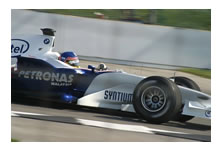 Mario went on to win the Indianapolis 500, the Daytona 500, Indy Car National Championship, and dozens of other championship races.  He is the most celebrated race car driver in history.

What made the difference for Mario Andretti?  How did he succeed with so many disadvantages?  The answer is he was passionate about a goal and he pursued it with drive and commitment.  You can do the same.  Don’t worry about what advantages you did or didn’t have.  Just take hold of your goal and chase it with every ounce of enthusiasm and commitment you can muster.