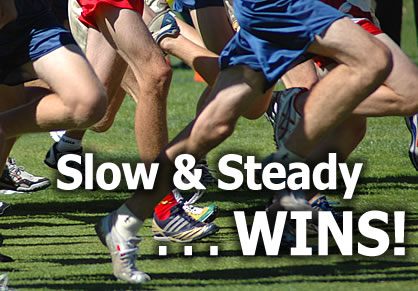 Remember the old story of the tortoise and the hare? The hare had more speed and ability than the tortoise could ever hope to have. His body was built for swiftness. The poor tortoise had to carry a heavy shell everywhere he went. His movement was slow and cumbersome. Yet, the tortoise won the race with consistent, steady effort.

Many of us find ourselves in a similar situation as the tortoise. Competitors, customers, or co-workers might be smarter, faster, or endowed with natural talents that you don’t possess. You may have personal burdens that you have to carry. Yet, you can still come out on top with consistent, steady effort. The winners in life are not necessarily the fastest or strongest; the winners are those who don’t give up.

Marathon runners know this principle well. When the starting gun sounds, people dash off the starting line like sprinters. A pack of front runners soon develops. But the one who wins the race is seldom in this pack at the front. He or she knows that a constant, steady pace – not a fast start or a flashy finish – ultimately wins the race.

It’s the same in business. Those who have the ability to formulate a well-thought-out plan of action and then consistently follow it – through thick and thin – will always win over those who jump in with flashy ideas or inconsistent commitment.

Consistent effort can move mountains. Several weeks ago, I decided the flower beds in my yard needed some attention. So, I ordered a dump truck load of top soil mixed with compost to be dumped in my driveway. I figured I could spread it out in the various garden areas of the yard. But, when I saw the huge pile in my driveway, my heart sank. How was I ever going to move that mountain of dirt? Would I ever be able to park in my garage again? I recruited several family members and we went to work. After the first evening, we had covered all of the flower beds in the front yard, but the pile of dirt didn’t look any smaller. I continued to work on the pile – a little at a time – over the next few days. Before I knew it, the pile was gone. The old joke, “how do you eat an elephant?” has sage-like wisdom in its answer, “one bite at a time.”

The worst thing that can happen is to become so overwhelmed by the magnitude of the task at hand that you do nothing. Take action. Stick with it. Be consistent and steady. Don’t give up . . . and you WILL win!