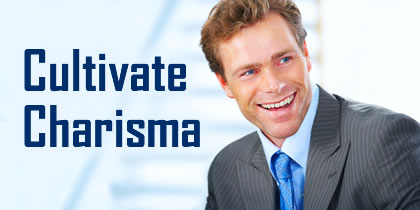 Forensic scientists indicate that it’s virtually impossible for a person to pass through a room without leaving some evidence of having been there, footprint, hair, scent, skin, bodily fluid, and fingerprints­—all these and more leave clues that you have been there.

There’s another impression that lingers after you have been in a room.  It could be called your social footprint.  Some refer to it as natural leadership.  I think the best word is charisma.

Have you ever noticed that some people brighten a room just by entering.  Suddenly, things are happy, upbeat, fun and positive.  Right away, you want to be with and follow this person.  I think we’ve also all experienced the opposite, when the entrance of one person negatively impacts the entire room.  Suddenly, things are darker, more depressing.  We want to get as far away from this person as possible.

I once worked for a man who had charisma.  Even though working conditions were not the best, and the work was hard.  Everyone wanted to be around him and to please him.  He was able to get people to come on time, work long hours, and have a good attitude under very difficult circumstances—all by virtue of his charisma.  He treated his team members like valued human beings.  Although he operated within strict guidelines and upheld the highest standards, people willingly complied because they knew he cared about them.  As a result, not only was his team very successful, he was able to develop numerous leaders from within his team who later became top leaders and producers in their own right.

I knew another man who was just the opposite.  He led by fear, threats and intimidation.  People were afraid of him.  He was constantly threatening to get someone fired, punished, or even personally harmed, for not agreeing with his opinions or following his direction.  He treated people like machines that, if they appeared to be functioning at less than 100% efficiency, should be simply discarded.  This man seemed to get things done through dogged will and coercion, he viewed himself as productive and efficient.  He even thought he was respected.  The truth is, he was only feared and despised.  Whenever he wasn’t looking, his team consistently undermined everything he tried to do.  Eventually, the atmosphere was so poisonous that he was forced into an early retirement from his company.

What is charisma?  It’s a learned set of behaviors that make people feel comfortable, safe, optimistic, and drawn to your leadership.  Do you have to be in a position of leadership to have charisma?  No, it has little to do with your position and everything to do with your persona, the way you act and treat people.

Some people in management who are reading this article might be saying to themselves, “I have a job to do, I’m not here to be popular.”  Charisma isn’t about being popular, or even liked.  It is much more.  It’s natural leadership.  Not natural in the sense that you are born with these traits, few are.  What I mean by natural leadership is that people naturally and spontaneously want to follow a charismatic leader.  To managers and leaders who dismiss this idea saying that developing charisma is a waste of time, or who believe it might even undermine their authority, my response is: You’re selling yourself short.  Leaders without charisma will forever feel like they are swimming upstream because their team will be opposing them at every turn (often behind the scenes, or when the boss is not looking).  Leaders with charisma, on the other hand, work synergistically with their team members to accomplish incredible results.

Now for the good news: charisma is NOT something you are born with!  It’s simply a set of skills and attitudes that you can practice and develop.

Here are 10 Keys to Cultivating Charisma:

Success Tip: People with charisma have amazing influence over others.  They pass through life inspiring greatness, uplifting spirits, and planting seeds of excellence. They are a valuable part of any team and command higher salaries.  The truth is, whether you are in management or not, you need to cultivate charisma.  It will help you at work, in your family, and your social life.