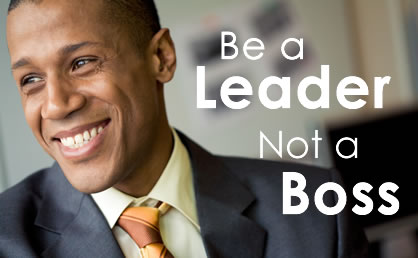 As a teenager, I worked in a grocery store where there were two managers, one during the day, and another in the evening.  One was liked and respected by every employee.  He was a true leader in the sense that people wanted to please him and follow him.  The other manager was despised by many.  If he told an employee to do something, they often did it grudgingly and half-heartedly.  He was the boss so they did what he said, but never gave the level of effort and loyalty afforded to the other manager.  I’ve often wondered why.  What caused one manager to be respected and followed, where the other was despised, ridiculed, and occasionally sabotaged by his employees?  One was a true leader, the other, just a boss.

What is the difference?  As I’ve watched people in leadership positions over the years, I’m convinced that it’s not just a matter of personality or charisma.  The difference between a boss and a leader boils down to his or her attitude.

A boss relies on the authority of the position to command obedience.  He or she is in charge and knows it.  Bosses typically think they are smarter, better, and more qualified than anyone else, simply because of their position as a manager or supervisor.  They mistakenly assume that they have all the answers and those who are subordinate to them know nothing.  Bosses ask employees to do things that they themselves would never do (they are too good or important, you see).  It’s an attitude of superiority, entitlement, and power.

A leader, on the other hand, earns the respect of those he or she works with.  Leaders feel that each employee is an indispensable member of the team and that the leader’s role is to provide vision and then set the example by being a model contributor toward that vision.  The leader never asks an employee to do something he or she would not be willing to do under similar circumstances.  Leaders value the input of employees from every level and help all employees “buy in” to the company’s mission and direction.  When employees understand the significance of their contribution to the company vision, and observe the leader’s commitment to help the team achieve these goals, they willingly and instinctively follow the leader.  The leader’s attitude is one of mutual respect, teamwork, and vision.

We all have influence over those around us.  My question is, “What kind of leader are you?”

Success Tip:  Whether you are the company president or working in the mail room, adopt the attitudes of mutual respect, teamwork, and commitment to the company vision.  As you do, you will become a true leader.