About a year ago, our committee was asked to build a parade float for a community parade this month. No one on the committee had ever built a float before, so we knew we were going to have to investigate and get lots of good advice. We had a year to complete the project, so we decided to spend 6 months researching and planning, and 6 months actually building the float.

After months of research, brainstorming and discussion, we came up with a theme and concept for our float that we all felt good about. It’s an animated rendition of a family playing on a foaming rootbeer float. We thought it was clever and interesting, and we had a rough drawing of what it would look like. We were ready to start building –we thought.

That’s when we got a great piece of advice that made a huge difference in the project. “We need to produce a detailed image of exactly what the float will look like,” someone said, “something big that we can hang on the wall so that everyone knows what we are building and there are no questions about how it will look.” We thought that sounded like good advice. But, it wasn’t as easy as we thought it would be.

In order to create an exact drawing, we had to decide on colors and texture, we had to measure the float dimensions and determine the relative size of each element and its exact placement on the drawing. Each step produced a lot of discussion and opinions and it was several more weeks before we finally had a finished rendering that everyone agreed with. We enlarged the final drawing to a 4 foot by 8 foot poster and hung it on the wall of the warehouse where we were building the float.

It wasn’t long before the value of this drawing became apparent. As each element was framed, we were constantly looking at the drawing. Workers and community volunteers who came to help were able to immediately know what they were building and what it would look like in the end. As design questions came up, we would walk over to the poster and say, “how can we make it look just like that?” It was amazing how often we referred to that picture. 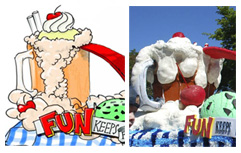 As a result, the finished product looks almost exactly like the drawing. See for yourself in the pictures below of the drawing and the corresponding elements of the finished float. 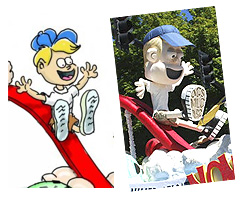 I’m satisfied that once that rendering was complete and hung in the warehouse, our job was half done–even though we hadn’t actually built anything yet.

This drawing became a detailed blueprint that guided every step. It was the yardstick that we used to measure our progress.

How does this relate to you and me? We all have goals that we want to achieve.

Most important, once you have this detailed, visualized plan in place, you need to put it someplace prominent where you can look at your plan regularly. Place reminders in conspicuous places where they will be constantly in front of you. When roadblocks, delays or challenges arise, look at your plan and say, “how can I make my life look just like that?” Then, work to make it happen! As time passes, you’ll find that your life will come to look more and more like your visualized goals and, just like our float, the finished product will closely resemble the plan.

Success Tip: Turn your goals into a detailed picture that you can visualize and work toward every day.